High blood pressure is a risk factor for other diseases such as heart attacks or strokes. But are you really aware that 50% of these complications could be prevented if something is done about high blood pressure early on? You can personally do something about it very easily. Because the most effective remedy is a healthy lifestyle. We show you 17 tips on how to lower your blood pressure without medication.

Watermelons are 95% water. But as many of you probably know, the summer fruit is still rich in nutrients. Maybe you already enjoy the watermelon as a healthy summer snack. On the one hand, it is rich in vitamins and fiber. On the other hand, it is also low in calories and therefore a perfect snack. 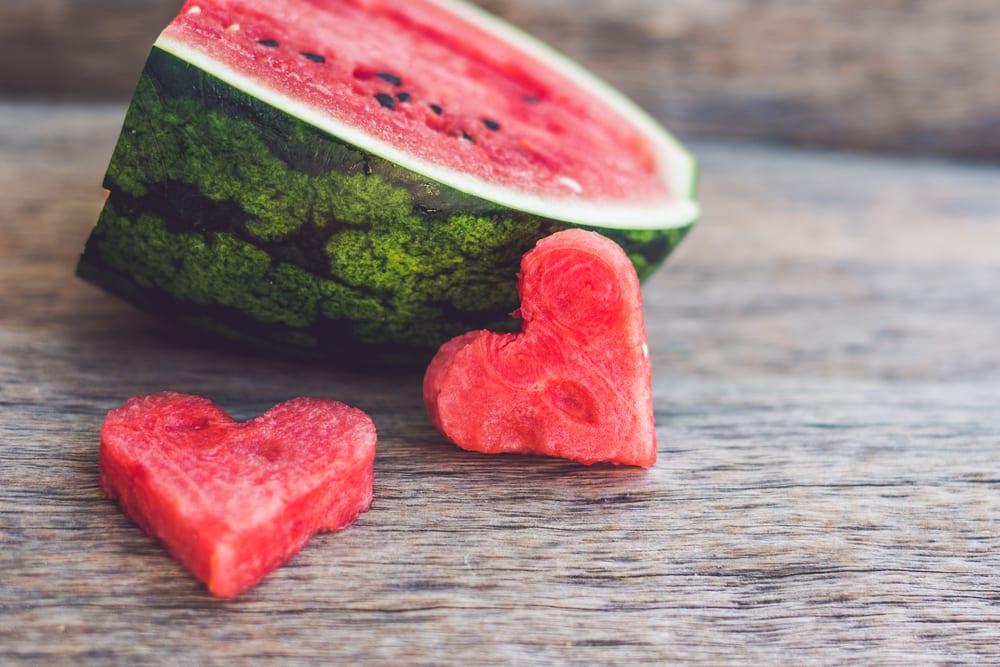 But did you know that regular consumption of watermelon can also help your blood pressure? Watermelon has the highest content of the amino acid L-citrulline of all foods. This is converted into arginine in the body. Arginine dilates the blood vessels and thus has a regulating effect on blood pressure.

For some, cinnamon is nothing more than a spice for the holiday season. But it is not for nothing that cinnamon was once interpreted as more valuable than gold in history. Because the spice is still considered an effective natural remedy. The antimicrobial effect, for example, has long been confirmed. The positive effects on blood sugar levels have also been proven.

But you probably didn’t know that there is also evidence that cinnamon is helpful against high blood pressure. Recommendations speak of about one gram of cinnamon per day to achieve a blood pressure-lowering effect. In particular, such an effect was found in diabetics, who should therefore definitely resort to cinnamon.

In 1989, garlic was voted medicinal plant of the year in Germany. The cloves are known as a spice or vegetable all over the world and are used in many dishes. But garlic is also popular in medicine. It has an antibacterial effect and can prevent arteriosclerotic vascular changes.

Garlic is also used to treat high blood pressure. The contained sulfur compound allicin is held responsible for this. Some studies have already shown that garlic has a blood pressure -lowering effect, but there is still no consensus on this. You definitely need to crush the garlic and eat it raw to get any potential effect.

14. Spice up with chillies

Do you like spicy food? Then you have the best prerequisites for this tip against high blood pressure. So far, chili has been used not only as a spice, but also against digestive problems, circulatory problems or circulatory disorders. Chili is also used for skin problems, muscle pain or back pain. There are also indications that the hot pod could be effective against cancer.

The stimulant capsaicin is responsible for most of these effects. It also has a relaxing effect on the blood vessels. This could effectively lower blood pressure. Further studies should clarify this. Population groups that traditionally use a lot of chilli are much less likely to suffer from high blood pressure. This connection should already give hope.

Blueberries are among the healthiest snacks you can eat. Not only do they taste good, they also contain valuable ingredients. Therefore, you should always access the blueberry season. The flavonoids contained in the berries have attracted particular attention in recent years. These are held responsible for the positive effects on health.

In the blueberries, these are in particular the anthocyanins. These give the berries their typical shade of blue. Above all, they have an anti-inflammatory, antioxidant and vascular protective effect. Studies have now also shown positive effects on blood pressure. For example, taking blueberries improved vascular function and thereby lowered blood pressure.

Many of you may know that a piece of chocolate leads to the release of endorphins in the body. Sometimes that’s why chocolate is so popular. But did you also realize that you can lower your blood pressure with chocolate if you have high blood pressure? Of course, it’s not quite that simple, because there are still small things to consider.

Another complementary measure to lower high blood pressure is drinking beetroot juice. However, beetroot is sometimes not for everyone. The turnip is usually eaten as a side dish in salads or as a soup. Basically, beetroot provides many vitamins, folic acid and iron. In addition, the tuber contains betaine, which is said to be helpful in preventing arteriosclerosis.

With regard to blood pressure, however, the nitrate contained is much more important. This is converted by the saliva into nitrites, which in turn are converted into nitrogen monoxide in the body. The latter has a vasodilating effect and thus lowers blood pressure. This effect of beetroot juice has already been proven in studies. However, you must consume at least 250ml of the juice daily.

Recommendations on drinking behavior repeatedly speak of preferring tea to soft drinks. Teas have therefore become more and more popular thirst quenchers. They are perfect as liquid suppliers. If you suffer from high blood pressure, you should better use hibiscus and chamomile tea from now on. Because these two varieties have been shown in studies to lower blood pressure.

Antioxidant substances in the hibiscus and camomile plants are said to be responsible for this effect. These have an anti-inflammatory and antispasmodic effect. They also lead to vasodilatation and thus to a reduction in blood pressure. So enjoy hibiscus and chamomile tea more frequently throughout the day and lower your blood pressure naturally.

9. Cut down on sweets

The high content of sugar and fat and thus of calories are particularly problematic. Frequent consumption of sweets, pastries or soft drinks, for example, promotes weight gain. This also increases the risk of obesity, type 2 diabetes and high blood pressure. Therefore, for the sake of your health, you should avoid sweets as much as possible. With a balanced, healthy diet, there’s nothing wrong with a sweet treat every now and then.

You have probably heard of omega fatty acids. These are among the polyunsaturated fatty acids that the human body cannot produce itself. Therefore, these must be ingested with food. However, the nutritional situation is usually such that too few omega-3 fatty acids are ingested compared to the omega-6 fatty acids.

The extremely positive effect of omega-3 fatty acids on the health of the cardiovascular system has already been proven. You also lower your blood pressure in a significant way. It is important that you get the omega-3 fatty acids from marine sources, especially fatty fish such as herring, salmon or sardines. Vegetable sources such as linseed, linseed oil or walnuts also serve as supplements. From the latter, however, the body can only utilize a small proportion of the fatty acids.

There are two minerals that affect blood pressure in a particularly strong way. We are talking about sodium and potassium, probably the most important mineral duo in the body. Both interact to regulate human blood pressure. Potassium has probably seemed less important to most of you up until now. However, in recent years, the importance of this mineral has been underlined.

In 2016, the World Health Organization issued a recommendation to increase potassium intake. Foods high in potassium include avocados, spinach, tomatoes, potatoes, and nuts. However, the ratio of potassium and sodium is decisive for blood pressure. Find out what this means in the next tip…

So far, sodium has mostly been presented as the most important electrolyte in relation to blood pressure regulation. Sodium is absorbed in particular through the consumption of table salt, i.e. the combination of sodium and chloride. So far, the focus has only been on reducing salt intake. But as mentioned above, the ratio of potassium and sodium is crucial.

An increase in potassium intake, as the tip above suggests, is therefore not sufficient on its own. High blood pressure can only be successfully combated if the sodium intake is also reduced. The recommendation of a maximum of 5-6g of table salt per day is clearly exceeded with an average of approx. 10g. So reduce in particular processed foods, sausage and meat products and seasoning with table salt.

5. Cut back on alcohol consumption

So far, the recommendation has been that men should enjoy a maximum of 30g and women a maximum of 20g of alcohol per day. This amount seems to be recommended without major impact on blood pressure. Half a liter of beer or a quarter of a liter of wine contains 30g of alcohol. In the interests of your health, however, you should not exhaust these recommendations if you have high blood pressure. Then a glass of wine or beer from time to time is also something special.

4. Learn to deal with stress

One of the biggest risk factors for high blood pressure is stress, i.e. the physical reaction to physical exertion. Stress is actually a natural desired effect that occurs when there is a threat. But even today, stress in the family, at work or in sports is often unavoidable. It is therefore particularly important to learn how to deal with it correctly.

Stress management is an important factor in the management of hypertension. Always plan breaks for relaxation where you can switch off. Look at situations objectively from a bird’s eye view instead of just subjectively. Learn relaxation techniques or try to tackle unnecessary causes of stress.

The harmful effects of smoking are now well known. Around 300 people die every day in Germany as a result of smoking. Nevertheless, according to statistics, around 25% of people older than 15 smoke in Germany. Of course, this is very much related to the high addiction potential of tobacco. Smoking should be considered an absolute taboo, especially for people with high blood pressure.

The reason for this is that every puff on a cigarette immediately raises blood pressure by quite a bit. This means that high blood pressure patients experience an additional increase. Smoking thus further damages the vascular system and increases the risk of cardiovascular disease, which already exists due to high blood pressure.

2. Get active in sports

For example, take the stairs instead of the elevator or avoid driving more often. For people with mild high blood pressure, moderate exercise is recommended for 30 minutes a day at least three days a week, and ideally even five days a week. Suitable sports are brisk walking, walking, hiking, cycling, swimming or dancing.

Arguably the most important cornerstone in the treatment of high blood pressure is achieving a normal weight. Every kilogram too much on the ribs means a certain increase in blood pressure. This in turn increases the risk of cardiovascular disease. The so-called body mass index, abbreviated BMI, serves as a guide for this. With this, the body weight is set in relation to the square of the height.

According to this classification, normal weight ranges from 18.5 to 24.9. A BMI of 25 or more is considered overweight. The reduction in body weight by 1 kilogram leads to an average reduction in blood pressure of 1.5/1 mmHg. This is due in particular to a widening of the vessels and a reduction in the sympathetic nervous system. A combination of healthy nutrition and physical activity makes it easier to lose weight and also lowers blood pressure.

The secret code is 03